First came texting.. or sms.  Then came a slew of other chat platforms like BBM, Facebook Messenger, WhatsApp, Snap, and not to mention the messaging functions in other apps like Instagram.  I thought it was downright ridiculous what Facebook paid for Whatsapp considering that they could’ve bought all of Blackberry, including Blackberry’s BBM platform and security IP for a fraction of the price.  I could see a shift away from sms but considering that 99% of my texts were just brief text messages, all the added functionality on the newer platforms were lost on me.

The craze over Snapchat also seemed rather ridiculous.  The novelty of sending nudes that would auto-delete wore off pretty quickly when people remembered you could still take a screen shot, but the platform persisted.  I think I eventually figured out why Snapchat was so popular, and it’s rather interesting.  When pictures auto-delete, they don’t take up space on your phone, meaning you can send them frivolously.  A picture is worth a thousand words so a facial expression along with a text is a far richer message than just the text.  It’s also a bit of a game with all the added functionality of filters that continue to push the boundaries of augmented reality.  Effectively, it’s a superior mode of communication to classic texting and like with most things.. the kids are all over it while the old people are complaining about how they don’t understand kids these days.

So what’s the winning recipe?  Especially when you have such well established heavy-weights dominating the industry?  Simple solve the two most relevant problems.  Give them a centralized messaging platform and take an opensource approach to the development of add-ons and other features.

A central messaging platform would allow you to receive messages from all the other messaging platforms, features in tact.   The opensource approach to feature development and add-ons would effectively give the platform to the people, letting them continually develop what they wanted for it.  Almost a democratic approach to its evolution.

Anyone already using more than one platform would likely to gravitate to a centralized messaging hub.  Knowing that the hub maintains the features of all other major platforms, you wouldn’t even need to have the app on your phone after adding your account.  Keeping the feature development in the hands of the users would also ensure that the platform would always remain current.

Texting is like a utility.  Sending brief messages from person to person has become standard mode of communication and the technology is readily available.  Make it secure, make it quick, and have a rich set of continually updated features.  One and two are the responsibility of the business, number three are for the people.  I see a few other businesses who have pulled this off, and many more who might benefit by taking a closer look. 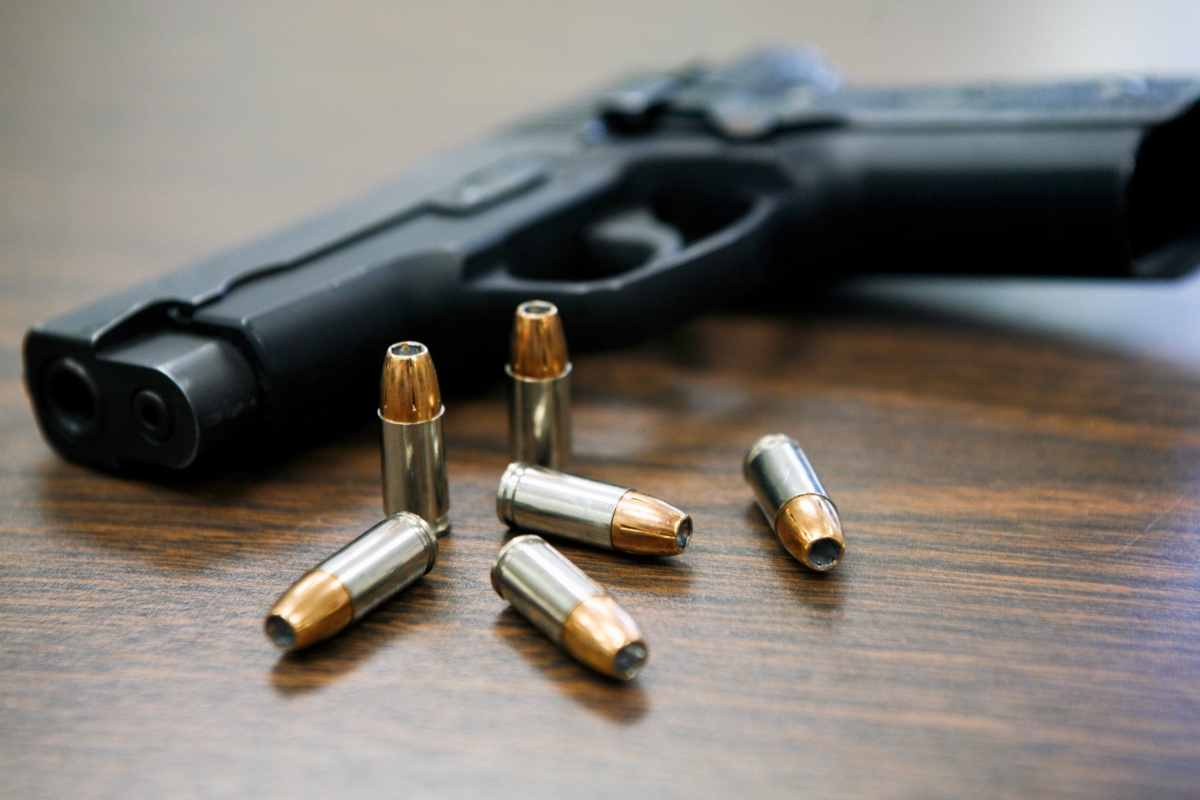 I like guns.  I appreciate the engineering, they’re fun to shoot, and it’s a skill I enjoy developing.  That said, I’ve only been out shooting a few times and while I wouldn’t turn down an invitation, it’s not big on my list of priorities.  What’s actually higher on my list of priorities is coming up with a long overdue solution to a very current problem: gun violence.

I guess I should start by laying out a few pieces of my framework on this one.  I agree that guns are fun to shoot and that people should have the ability to protect their families.  I also think that guns as they are today cause more problems than solutions and something needs to change.  When both sides are asking for something reasonable, compromise is a lack of imagination.

The first thing that people have to acknowledge is that this has nothing to do with the history of the country or the second amendment.  This is a conversation about how can we keep having fun at the range while protecting ourselves and our families, without putting lethal weapons in the hands of irresponsible people.

Part of how I arrived here is in observing the US’s global nuclear policy.  Effectively, the US focuses on limiting the number of countries with access to nuclear weapons because it’s risky to have that much lethal power available to someone who’s intentions you can’t be certain of.  So they go around the world intervening and restricting nuclear programs – perhaps rightfully so.  Personally, I think there will just about always be something more sensible for a government to invest in than nukes, but I’m also empathetic to the only reason that they give: we want to be able to protect ourselves from a hostile government.

On a global scale, America agrees that people should have limited access to deadly weapons.  On a domestic scale, they disagree.  I’m pointing out the hypocrisy so that we can agree that guns and gun violence aren’t an ‘American thing’ or part of our culture.  The situation that we’re in now is caused by mental illness, bad government, and a lack of innovation.  Mental illness is something that will take a cultural shift, bad government will take a revolution, but innovation is something we can tackle now.

So how do we close the gap?  How do we give everyone what they want?  Easy.

Whether you’re at a gun range, or keeping a gun under your bed for home defense, you don’t need to kill your target.  There is literally zero need for a recreational target shooter to need lethal ammunition.  I would go so far as to say that without the risk of death, shooting ranges would be significantly more popular.  Further innovations would lead to a variety of non-lethal munitions, further diversifying the sport.

For home defense, I suspect most people would agree that if they had the choice, would rather incapacitate than kill.  The reality is very few of us, if any, have the wisdom necessary to know when it’s appropriate to take a life.  As we continue to be reminded, most who think they do are wrong.  If we can agree on that, let’s agree that the reason we want guns isn’t so that we can kill each other, or even kill someone who poses a threat to us, it’s about keeping ourselves safe.  We need a non-lethal ammunition that can reliably incapacitate.

The non-lethal options that exist today hasn’t proven viable, so we need to innovate.  I’m not smart enough to know exactly what this product or these products would look like but I do have an idea on how we could get there.  First the government announces an intent to shift from lethal weapons to non-lethal weapons.  Then, allocate $100 million to a venture capital fund and have that fund approach universities across America, looking to invest in companies developing alternative munitions.   This will spur a wave of innovation in the direction of non-lethal munitions and with a little bit of time, we should arrive at a better mouse trap.  Who knows, maybe we’ll end up with a Star Trek-esque stun gun.

The idea is that if we could design a weapon that was easier to use, barely needed to be aimed, and put your home invader into a comatose state until the authorities arrived, why would you want a classic pistol?  It wouldn’t increase your chances of defending yourself, only your chances of harming the other person.  If we can agree that the people who want to keep using lethal ammunition because it increases their chances of being able to hurt people shouldn’t have access to lethal ammunition, I think we’re all on the same page.  If we could get alternative munitions to the point where they were this safe and easy to use, imagine what it would do for everyone’s personal safety.

I know, I know, I forgot something.  Or rather saved it for last.  Hunting.  I’ll admit I didn’t quite have it figured out when I started writing this but a thought occurred to me while I was writing and it might be a good one.  The one recreational scenario where lethal ammunition does make sense is when you’re hunting, especially when you’re hunting for food.  Hunting for sport should probably be non-lethal to begin with so for the moment, let’s focus on hunting for food.  We need the ammunition to be lethal for our target, but preferably, only our target.  It would be nice to not have to worry about shooting other hunters.  If that’s our criteria, we could probably innovate our way out of this one too.  So we need a bullet that can be fired from a standard rifle which upon impact, would kill a… let’s say moose, but if it hit a person, would be non-lethal.  Sounds to me like a miniaturized dart (like from a tranquilizer gun) containing a compound that would kill a moose while leaving a personal unharmed.  Not only would that prevent nearly all hunting accidents, it may also be a more humane way to hunt.

When reasonable people are asking for reasonable things, compromise is a lack of imagination.  People should be able to protect themselves.  Protecting yourself isn’t the same as hurting someone else though.  If you want to protect yourself by hurting others, you need help.  Let’s find a means to protect ourselves without hurting others, and find a way to help others who haven’t yet figured out why hurting others just about always creates more problems than solutions.

It occurred to me a while back that despite how well coordinated drivers have to be with one another to avoid accidents and maintain order on the road, we’re not given much to communicate with.  For the most part, it’s just the horn.  The horn is not the most pleasant sound.  When most people use it in anger and frustration, most people probably perceive it as an aggressively unpleasant sound.  When our only mode of communication with one another on the road is aggressive unpleasantness, I wonder how that impacts how we drive.

So why not a secondary horn, with an audible sound that implies ‘thanks!’?  I know there’s the double tap of the standard horn, but still, why not a secondary horn?  No one blink screw you, two blinks for thanks, a genuinely happy sound that says I appreciate your conduct on the road.  Simple mechanics, simple market research effort to determine the sound, and a meaningful step towards more positive lines of communication with one another.  I’m looking at you Elon..