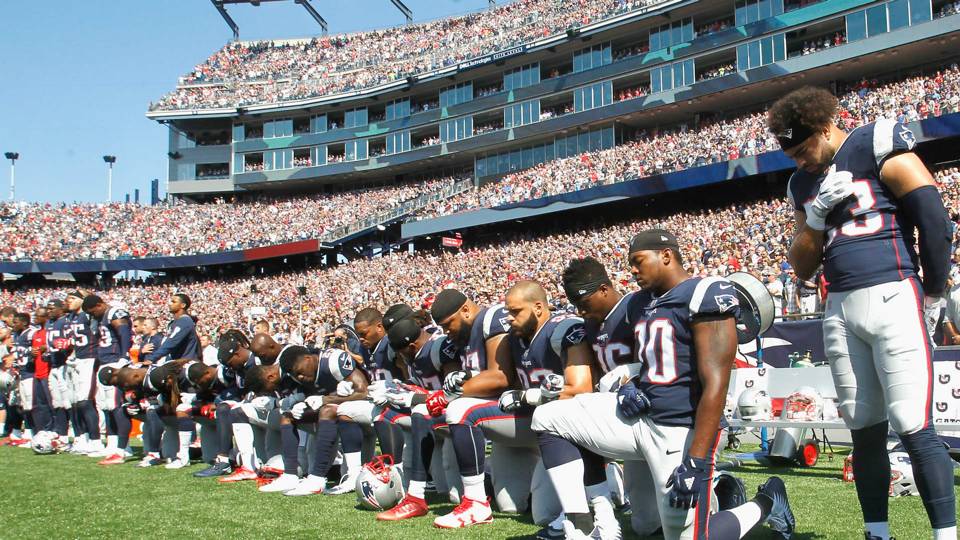 There have been times where I’ve felt more patriotic than others, but generally speaking, I find it a little strange.

The times where I identified as a patriot, were times where I felt good about how my country was impacting others, and felt aligned with the values my country had displayed.  That doesn’t happen so much these days.  These days, it’s difficult to understand what a patriot really is and whether anyone should want to be one.

The NFL looks to have passed a new anthem policy.  From what I understand, if you’re on the field, you have to stand for the national anthem.  The president’s remarks were something to the effect of, ‘if you don’t want to stand, maybe you shouldn’t be play.  Maybe you shouldn’t be in the country.  If you’re not proud of the country, you shouldn’t be here.’  I’ve often said that Trump was going to be one of the best things to happen to this country.  Not because he leads or inspires, but because he’s forcing us to ask questions which weren’t being asked.

What if you’re not proud of the country?

Google defines a patriot as a person who vigorously supports their country and is ready to defend it against enemies or detractors.  Seems pretty straight forward.  So where’s the nuance?  I suppose it would be in how you define supporting your country, and who you determine to be the enemies or detractors.

Some people support their country by displaying the country’s branding as often as possible.  Maybe I should’ve said flag or colors instead of branding, but which is more accurate?  Some people support their country and defend it against enemies by joining the military and fighting overseas.  But how did you know who our enemies were?  Some people defend the country against detractors by protecting the commander and chief.  But what do you think the commander and chief should be protected from?  It seems as though patriotism has more to do with manipulation than it does with national pride.

I’ve struggled with the concept of pride recently,  When to have it, why to have it, and when it’s too much.  I grew up around ‘Azn Pride’.. it was kinda like white pride but Asian.  More often than not, it was about screen names and gamer tags but from time to time, it meant more than that.  It reminded people not be ashamed of where they were from or what they looked like, and gave them a sense of confidence and community among their peers.  But there were also times where Azn Pride was about showing dominance over other groups.  But what are you really proud of at that point?

Personally, I don’t think you can have patriotism without nationalism and nationalism never seems to work well out for anyone.  Nationalism really is a game of us versus them on a global scale.  Not only did we not have a say in where these lines on the map were drawn, we have no choice as to which side of the line we’re born to.  Yet these lines are enforced vigorously.  We are told that the people inside those lines are our brothers and sisters, and that the people outside those lines are potential threats.  And yet our country was built upon those who came from outside the lines.  And is under attack from those who were born here.

Perhaps patriotism is inherently flawed.  Right now, it encourages us to protect our enemies and betray our communities.  We’re told that we’re not patriotic when we don’t follow the direction of our president.  When the values of our people, country, and president are no longer aligned, who deserves our loyalty?  If patriotism is defined by a loyalty to a country, is that better understood as the people of that country, or those who are running it?  People in government demanding loyalty  sounds awfully undemocratic.  In a democratic country, where democracy literally means government for the people by the people.. the answer seems rather obvious.

So what does democratic patriotism look like?  Maybe it’s not necessarily an oxymoron.  I think it looks like a celebration of the people.  It’s a celebration of our diversity rather than a celebration of the red, white and blue.  It’s building monuments to the people who are making the world a better place today rather than arguing over old civil war statues.  It’s marching together for no more wars, and it’s marching together for no more police violence.  It’s not just about celebrating our accomplishments, but about acknowledging our darker moments in arriving here.  And you’re damn right that it’s about being able to take a knee during the national anthem to show your support for those the country has failed.

So what does patriotism look like when the lines between us and them disappear?