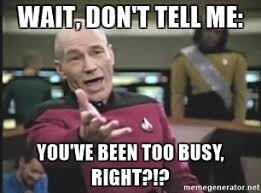 Apparently busy is the new black.

When I’m in the zone, I usually work from sun up to sun down.  When I was at the bank, the early morning was for responding to email, research, and taking account of any interesting activity that day.  The late morning was usually meetings or portfolio management.  Lunches were always overlapped with meetings.  Afternoons were usually filled with meetings or cold calls.  The early evening was hopefully the gym, but more likely to be a networking event.  I usually got home between 9-10pm.  Then I’d fire up the vape and tune out until I fell asleep on the couch.  And repeat.

I understand busy.  But I also understand bullshit.  Even when I was at my busiest, I always followed through on my commitments.  If I said I was going to be there, then I was.  You became part of my busy.  So why have we accepted busy as a valid excuse for being flaky?

I refuse.  You’re not busy.  You’re just not honest about your priorities.

In an age where people are averaging hours a day on social media and binge watching series on Netflix, I think it’s time to collectively admit that we’re not nearly as busy as we claim to be.  It’s not that we don’t have an overwhelming and unrelenting stream of things competing for our attention, it’s that we’re unable to be honest about how we prioritize.

Burnt out after a long week because you work a job that sucks?  Feel much more like crawling into the safety of your couch than heading out to an event?  That’s cool, own it.  Told your friends that you’d love to grab dinner with them but are looking at your bank account and would rather eat ramen? That’s cool, own that too.

We need to get better at being honest with one another because telling each other that we’re busy just isn’t cutting it anymore.  Beautiful things happen when we’re honest with each other.  Maybe we’d be more honest about our depression, or finances, or our lack of motivation to go outside when it’s raining.  Whatever it is, if they matter to you, just don’t tell them that you’re busy.