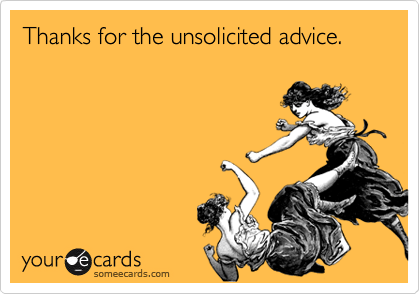 Back in the day, I had a friend forward me a Harvard Business Review article on sales types.  There was an element of sales to our job and he wanted to point out that I fell into the ‘challenger’ category.  The challenger would hear the customer out, identify where they had a mental block around the transaction, and then challenge that block.  While this was among the most successful approaches, it was not the most common.  The person in this position had to be confident in their own expertise, accurate in their analysis of the situation, and willing to tell the customer that they were wrong.  In most cases, the customer would hear that they’re wrong, be surprised, and want to know why.  This was an opportunity to drop some knowledge on them that could very well influence the sale in a positive direction.  This has proven to be one of the the most effective approaches when buying the product or service was genuinely in the customer’s best interest,

But what if your solution is in their best interest, but the person doesn’t want to hear it?

This is what I’ve been running into over the years and I’ve found it rather challenging.  I’ve learned that at the core of who I am, I’m a problem solver.  If you bring me a problem, there’s a good chance I’m going to try and provide a solution.  It’s like a reflex.    I also learned that unsolicited advice on how to live one’s life was rarely well received.  It didn’t matter if the problem was clear as day, or the solution was tried and true, if they didn’t want to hear it, they didn’t want to hear it.

Perhaps the most classic example I’ve faced is trying to be supportive of a girlfriend who’s facing a problem with an emotional mindset.  When men reach out to other men about their problems, they’re usually looking for a solution.  From my experience, when a woman reaches out to you with a problem, offering a solution will make the situation worse.  There’s a short but highly entertaining and informative YouTube video that speaks to this call It’s Not About the Nail.  You have a young couple sitting on the couch and the girlfriend is talking about a pain in her head and the anxiety she has around it.  Then a new camera angle shows that there is an actual nail in the girl’s forehead.  The boyfriend sheepishly asks if it might be the nail causing all this pain.  She snaps at him saying it’s not about the nail.  He pushes back saying that the nail in her head might be the cause of all this.  She snaps at him again telling him to stop trying to fix everything, that all she needs is someone to listen to her.  He tries once more suggesting that what she probably needs is that nail taken out of her head, but she cuts him off and says “see, you’re not even listening now.”  He says fine and decides to listen, so she goes on to describe all these symptoms of the pain from the nail.  He musters up a, “well that all sounds.. really hard.”  She responds with a soft, “thank you.”

I still find this dynamic to be so confusing.  I do see value in having someone to talk to about the problems you’re facing, but I also think that you should also be interested in the advice of the person you’ve chosen to confide in.  Perhaps it’s based in comfort.  When I face a challenging moment, I pay very little attention to how I feel in that moment because I’m focused on overcoming the challenge.  Perhaps for some, it’s not about overcoming the challenge but about feeling better.  And perhaps for those individuals, telling someone who will nod along, be agreeable, and gives that impression of unconditional support is what helps return you to feelings of safety and comfort.

This has proven itself to be a significant challenge in my life as my two biggest motivators seem to be solving problems and helping others.  When I see someone facing a problem, my mind races to a best solution and I’m eager to help them get there.  But it seems as though the more I want to help, the less interested they become in hearing what I have to say.

After having been through that ‘Nail’ scenario a few times, it wasn’t difficult to see that if a woman came to me with a problem, it was unlikely that she would be looking for a solution, and more likely to be looking for someone to listen and understand.  I also noticed that women, in this context, were far better listeners than men.  In one relationship, I said that I might make a better problem solver than her friends, but that I probably wouldn’t make as good of a listener for the same reasons.  I suggested that if she just wanted to vent, that her friends were a better option.  But that if she was ready to solve a problem, I was always ready to help.  She understood, thought it was fair, and I was excited to see how it worked.  It worked terribly.  She called me in tears one day about her pet having injured himself.  I clued in and realized that she was probably looking for someone to listen… so I did my best and I think I did pretty well.  Then she calmed down and shifted to asking about some legal issues she was facing from a car accident a couple years ago.  So I ask if she’s looking for me to listen, or for solutions to problems.  She thanks me for checking in, asked for solutions, and proceeded to lay out the problem.  The solution happened to contain an inconvenient truth.  She didn’t want to face the fact that she would bear some responsibility for the incident and that there would eventually be consequences.  She broke into tears, was upset with me for not being compassionate to her situation, and then decided that she wasn’t ready to hear what I had to say and hung up.  A few months after we broke up, she texted me to let me know how much she appreciated those moments and how valuable they were to her in the long run.

It was almost a couple years ago that she sent me that message and it helped me notice something.  A big part of what I do is I try to understand the situation in the most honest terms possible.  If I see a difference between my understanding of the situation and their understanding of the situation, I’ll try to understand why.  In most cases, it seems as though the problem is rather obvious and the solution is rather simple.  The difficult part is that it includes a hard truth, an inconvenient fact which they’ll have to face if they are to truly solve this problem.  The problem I’ve observed about hard truths is that they challenge your existing beliefs, and it can be much more comfortable to retreat to your existing beliefs than it is to venture into the unknown.  And instead of recognizing that this fear, discomfort and anxiety are a result of moving away from the comfort of your beliefs and towards truth and the unknown… you assume the messenger is the one making you feel this way.

I came across a Mark Twain quote recently that speaks to this dynamic and something bigger that we’re all dealing with in some way right now, “It’s easier to fool someone than to convince them they’ve been fooled.”